You may find it surprising to hear me say that I haven’t significantly changed the way I teach tone, vibrato, and dynamics since I have switched to lessons and ensembles entirely online. The issues students present with are the same as they ever were. However, I’ve had to significantly up my game in terms of how I listen and diagnose. Because of the vicissitudes of the online services we use to communicate with our students (Zoom, FaceTime, Google Duo, Skype, etc.), it’s been a steep learning curve in understanding what I’m hearing from a student over the internet and being able to extrapolate the exact nature of the issue they are presenting with and formulating a response that will be meaningful for the student.

And by the same token, students are going to have similar issues in listening to any playing examples I provide in synchronous sessions. Many of the nuances of tone, vibrato, and dynamics get lost due to the sound compression algorithms of the various conferencing applications. In some cases, we’ve had to resort to asynchronous videos sent back and forth to make a point and provide meaningful feedback to the student. 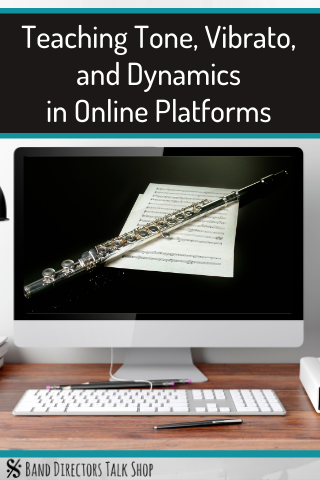 An obvious place to start is making sure the students you are working with have a decent set up at home in terms of equipment and placement in front of the camera. Help them set up their computer or device in such a way that you can see their upper body clearly. Also, instruct them in making sure they are well lit. They want to have a light source in front of them rather than behind them. They can face a lamp or a window with their device between the light source and themselves. Many tablets and phones have decent onboard microphones. I love my iPad and iPhone, though I have also been experimenting with external microphones. However, it’s a real mixed bag with computers. Show the students how to test their equipment to see if the onboard microphone is sufficient. If it is not, a USB microphone becomes an essential tool in being able to evaluate what the student is doing. There are some nice ones available for around $50.

Diagnosing tone issues and solutions is the same as it has always been. It is helpful to know what kinds of actions cause what type of tone issues. Poor tone is caused by a lack of attention on how the player is relating to the instrument, shaping the aperture, and directing the airstream at the blowing edge of the embouchure hole. I recommend trying recreating all of these problems yourself, no matter your level of flute proficiency. You will solve the problems more easily if you know the difference in how it feels and sounds both ways, incorrectly and correctly. Here is a quick list of potential problems and how to solve them:

Solution: The aperture is too large and the blowing angle is too shallow. Blow through a smaller aperture and angle the air down more. You can achieve a steeper blowing angle by putting the flute lower on the bottom lip, rolling out a bit, and reaching over with the top lip more, while maintaining the smaller aperture.

PROBLEM: STRANGLED OR PINCHED TONE, CAN BE FLAT OR SHARP DEPENDING HOW HIGH OR LOW THE FLUTE IS ON THE BOTTOM LIP

Solution: This requires some sleuthing on your part because you have to identify the source of the constriction. There are at least four places I can think of that can cause a pinched sound: 1) The lips themselves with a flattened and pinched aperture, 2) clenching the jaw with teeth too close together (common with kids who have braces, especially with rubber bands), 3) the back of the tongue is too high, constricting the airway, and finally, 4) the kid can actually be closing off the throat itself, as in activating the gag reflex. It takes some practice and discernment on your part to tell the difference which of these four constriction points are causing the problem. I can tell you that each one has a distinct quality that identifies it from the others, but it does take careful listening and practice to recognize each one, which makes it trickier to diagnose online.

Solution: Third octave notes seem scary to kids. To them, it seems like the natural thing that in order to control the third octave, they should roll in and pinch. After all, who wants to hear screeching high notes? This is precisely why they are having trouble. The solution, paradoxically, is to open up (roll out) the blow hole a bit, put the flute lower on the bottom lip, energize the air column more from the body core, and relax the grip of the aperture slightly. The speed of the air column itself will ensure the high notes speak with ease.

There are two main issues with teaching vibrato under any circumstances; learning the mechanics of producing vibrato and then understanding how to use vibrato as an expressive tool. To teach the mechanics of playing with vibrato, use exercises that help students learn to control the speed of the vibrato. A common issue for students just learning vibrato is that when they try applying it in music they are learning/performing, it is frequently too slow. Both you and the students should listen to professional flutists to hear how vibrato is used to generate direction and feeling in the phrasing. I’ll often use videos of pro players during lessons/classes and then discuss the students’ observations with them. I find that kids are very insightful and can glean understanding that they can take into their own playing.

When is a student ready to play with a range of dynamics? When they have good control of the air stream and breath support. It’s critically important that the student understands that the quantity of the air being blown into the instrument and the speed of the air column is not the same thing. If you ask students to play softly before they master these parameters, you are asking for a lot of pinching and pitch issues. A student needs to understand that they need to maintain the speed of the air even blowing a smaller quantity of air to play softly. There is no question that dynamics are more difficult to monitor in a synchronous session than some of the other parameters we have been discussing due to the shortcomings of the technology. At this point, it can be really useful to request a video to enable you to better evaluate what the student is doing.

In conclusion, I have found that I haven’t changed what I teach as much as how I present it and interact with the students. I am asking the students to share their thinking about what they are doing more than I was in an in-person setting (and finding that they can be remarkably insightful as to their issues and in devising solutions to problems). I’m also modifying exercises into smaller chunks and doing an exchange where they play, I’ll play it back, discuss the differences, and then have them play it yet again. I find I’m working with students more on the process of practicing to reach playing objectives.

Dr. Cate Hummel is author of Dr. Cate’s Flute Tips, drcatesflutetips.wordpress.com. She is an Altus/Azumi artist. Dr. Hummel is an Adjunct Professor of Flute at the University of St. Francis and founded Dr. Cate’s Flute Camp, a day camp for 7th-10th grade flute students. Check out Dr. Hummel’s website for more information www.fluteline.com