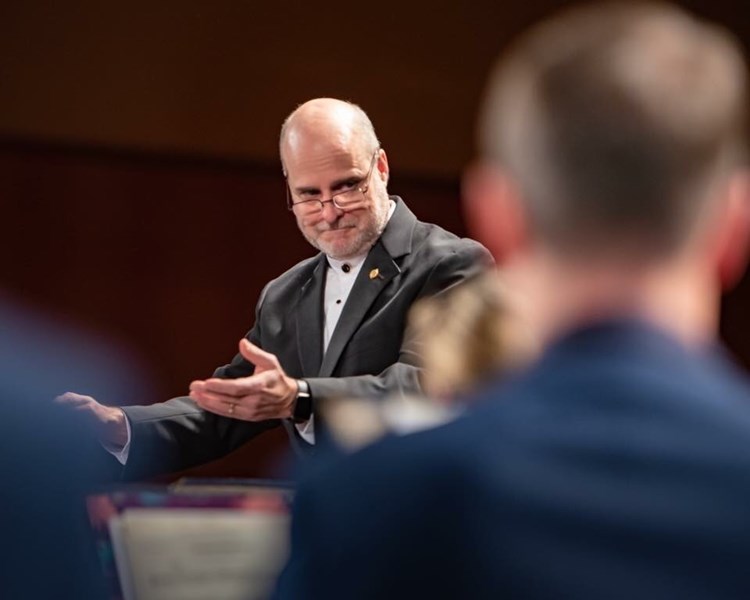 Curated from Mark J. Connors’ Everything Band –
Alex Kaminsky is the newly appointed Director of Bands at VanderCook College of Music. He has had tremendous success at every stop of his teaching career, including most recently at Marjory Stoneman Douglas High School.
Topics:

Alexander Kaminsky was appointed Director of Bands and Associate Professor of Music at VanderCook College of Music in 2019 after a highly successful tenure at Marjory Stoneman Douglas High School in Parkland, FL. He holds degrees from the University of Florida and Indiana University, is active as an adjudicator, and is in demand as a guest conductor/clinician across the country. Throughout his 30-year career as a high school band director, Kaminsky’s ensembles consistently earned Superior ratings at all levels of evaluation. In addition to earning Superior ratings at the FBA State Concert Band Assessment for an unprecedented 23 consecutive years (the last 13 of those years being with both his first and second bands), he is the only director in the history of the Florida Bandmasters Association to have had three concert bands from one school earn straight Superior ratings at State, and he achieved this three times (2009, 2018 and 2019).

Kaminsky’s bands have performed at the Midwest Clinic (2005, 2009, 2014, and 2018), ABA Convention (2014), CBDNA/NBA Southern Division Conference (2004 and 2014), FMEA State Convention (2014), National Concert Band Festival (2002 and 2012), and the National Wind Band Festival at Carnegie Hall (2009 and 2018). In 2018, the Stoneman Douglas Wind Symphony was named a National Wind Band Honors winner as one of only ten 6A bands in the nation. His marching bands consistently placed in the Florida Marching Band State Championship Finals, winning consecutive FMBC State Championships (2013 and 2014, 2017 and 2018) as well as being named a finalist band at BOA regional competitions.
​
Kaminsky has presented his clinic “How Can I Get My Band to Sound Like That” at various conferences and workshops, and his annual “How To Fix It” series at the FMEA Convention has been received to high acclaim, with over 900 attendees in 2019. He is a ten-time recipient of the National Band Association’s Citation of Excellence and has been recognized with numerous achievement awards for education including Florida’s 2019 FMEA Secondary Music Educator of the Year Award, FBA Oliver Hobbs Award, FBA Andrew J. Crew Award, National Honor Roll’s Outstanding American Teacher, Nobel Educator of Distinction, Teacher of the Year, and is listed in Who’s Who Among America’s Teachers. Kaminsky is a Conn-Selmer Educational Clinician and is an elected member of the prestigious American Bandmasters Association and the American School Band Directors’ Association. He has served on numerous state and national committees, and currently serves on the ABA Sousa/Ostwald Award Committee and the ABA School Bands Task Force. He has been featured in several periodicals including The Instrumentalist, Teaching Music, School Band & Orchestra Magazine’s “50 Directors Who Make A Difference” and Home Magazine’s “12 Exceptional Educators.”