A Tribute to Maynard Ferguson, with Videos - Nottelmann Music Company

A Tribute to Maynard Ferguson, with Videos

With all of the great jazz artists in history, what’s so special about the late Maynard Ferguson?  Critics say his showmanship was over that top.  “He’s a one-trick-pony.  He plays screaming high notes and nothing else.”  Well, this observer is proposing that Maynard Ferguson made a unique contribution to the art of jazz music, once left for dead in the USA.  This article/video post provides evidence that Maynard Ferguson was an extremely important and influential musical artist in jazz history.

How can this be?  In this currently vibrant climate of top-notch jazz, many don’t realize how it once rose up from the ashes.  The large number of popular jazz big bands that once criss-crossed the country by bus and train during the 1930’s a 1940’s, entertaining in clubs and concert venues everywhere, dwindled to just a few bands by the mid-1950’s.  Jazz legends like Miles Davis and Dizzy Gillespie had to travel to Europe just to find a paying audience.  During that time, dance halls and concert venues who once featured jazz big bands of 15+ members began turning to smaller 3-5 man rock-and-roll combos.  Also, the once popular AND DANCEABLE jazz music of the swing era evolved into what was labeled as “Modern Jazz” or “Be-Bop.”  While this new jazz displayed incredible musicianship and musical depth, jazz began to lose the audience of the everyday citizen who didn’t understand it and couldn’t dance to it.  But what was not realized then was that the musical style jazz, once the most popular music in America and much of the world, had not actually died–it only APPEARED to have died.  It was merely in a temporarily wounded state through the mid 1950’s-60’s.

Then, “Big Bands” began to find a new audience – schools.  Colleges like North Texas State and Berklee School of Music, and many high schools throughout America, became new venues for jazz big bands by adding jazz ensembles to their curriculum.  Concurrently, bands like the Maynard Ferguson “Orchestra” sprung up providing fresh inspiration for young musicians and music listeners.  The marriage of the two became known as the “Jazz Clinic/Concert.”

The clinic/concert was a real game-changer for me.  In my teen-age years, you might say I was a “rocker” as my musical tastes bent toward to the music of The Beatles, The Who, and other ’60’s and ’70’s rock artists.  But that all began to change with one of my first experiences hearing live jazz.  I attended a “clinic/concert” with my college jazz ensemble which was led by Maynard at a local high school. 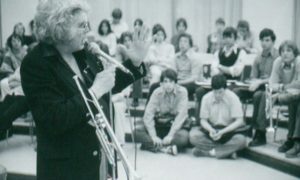 That Clinic/Concert model involved members of the Maynard Ferguson band during the day leading individual instrument clinics with music students, exposing them to specific tips, concepts and ideas to help develop their knowledge and skill. 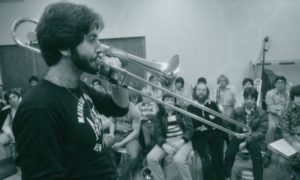 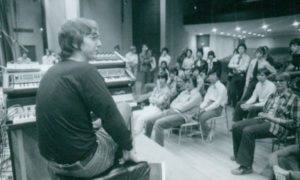 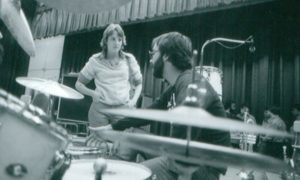 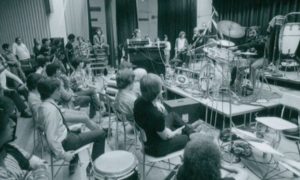 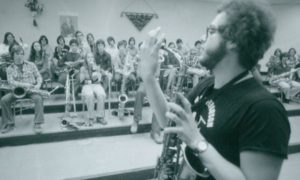 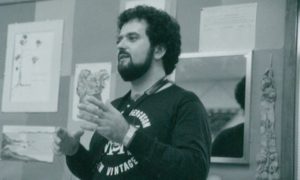 As part of that model, Maynard himself lead a CLINIC with the local school band.  There, I experienced what THOUSANDS of young people across American experienced at those events – excitement and inspiration.  I was hooked on jazz! 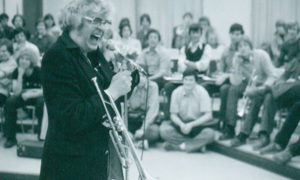 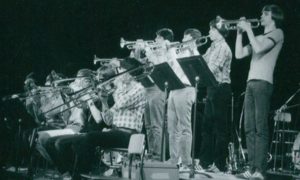 Maynard and his band planted seeds with young musicians and many, like me, grew into inspired music educators working in turn with the next generation of musicians.  The clinic was always followed with the evening CONCERT, featuring the host school band followed by the Maynard Ferguson Band.

INSTALLMENT #1 – Maynard hits the stage at a CLINIC/CONCERT!

Listen to this short clip from one of those CLINIC/CONCERT events, at the Canadian Stage Band Festival, and you’ll hear what I mean!

I believe these Clinic/Concerts helped propel middle schools, high schools, and colleges to incorporate jazz.  I also believe that surge of excitement and love of jazz that began back to the late ’60’s continues today.  Jazz continues to inspire school musicians as well as members of the general public who now listen to streaming jazz, digital playlists, and live music in various concert venues.  We owe Maynard Ferguson a huge debt, and that’s why we pay tribute to him in this post.

The iconic Gonna Fly Now, Theme from Rocky, is easily Maynard’s most widely recognized tune.  Here he is live on the Mike Douglas Show, 1977.

This is rare footage from the Ed Sullivan Show on CBS, where Maynard Ferguson was a featured soloist of Stan Kenton’s Innovations Orchestra. Watch as this 22 year-old budding star steals the show on this iconic variety show, weekly must-see TV for the whole country.

In 1950, 1951, and 1952, Ferguson won the Down Beat Readers’ Poll for best trumpeter.  In 1953, Ferguson left Kenton and spent the next three years as principal trumpet for Paramount Pictures, appearing on 46 soundtracks, including The Ten Commandments.   In 1956, he joined the Birdland Dream Band, a 14-piece big band with an “all-star” lineup, to play at the legendary Birdland jazz club in New York City. Although the name “Birdland Dream Band” was short-lived and is represented by only two albums over the course of a year, this band became the core of Ferguson’s performing band for the next nine years.

Fast forward and compare, the performance of the 22 year-old Maynard to a that of the 60 year-old Maynard, 1950 to 1988!  During that 38 years in between, he recorded TWENTY-SIX albums, and performed live thousands of times all over the world.  And as you can hear from this recording in St. Louis, he’s still got it!

The legacy of this legendary musical artist is partially lies in his forty-six albums and his thousands of live performances worldwide.  But more importantly, Maynard Ferguson’s legacy is in the influence on the music and the musicians of his time.  What better tribute than this but a star-studded lineup of some of the most successful trumpet players, all gathering on one stage?  The Maynard Ferguson Tribute Concert was held on September 20, 2006 at the University of Missouri Touhill Performing Arts Center, University of Missouri/St. Louis.  Here’s the amazing clip of the finale of that concert, of what?  What else. but his iconic Theme from Rocky.  As you listen, feel and experience this moment – a stage filled with such talent, with such love and gratitude for an individual.  This finale completes the tribute that night to their friend and inspiration, Maynard Ferguson.  – Ray Benton