Making Jazz Easier for Your Students (and Yourself) – With Rob Babel

An exclusive webinar from Nottelmann Music, with Rob Babel –

Whether your jazz ensemble meets daily or once or twice a week – whether you have years of experience or you are new to teaching jazz – you’ll find lots of tips and ideas in this webinar on jazz ensemble best practices.  This is a blog version of our complete webinar, located at NPD Webinars.

This discussion includes items from his recent clinics at a Missouri Music Educators Annual Conference and the Midwest Band and Orchestra Clinic, where Rob includes audio and video examples of ways you can plan for success.  Rob is a highly respected music educator and clinician, currently serving as Director of Bands at Fort Zumwalt North High School. 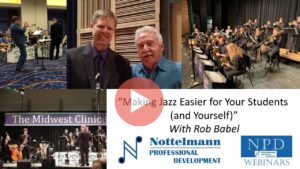 Rob Babel is currently in his 24th year at Ft. Zumwalt North High School in O’Fallon, MO.  His duties include directing the Panther Pride Marching Band, Wind Ensemble, Symphonic Band, Jazz Band and Jazz Lab Band.  In addition, he assists with beginning and intermediate band at North Middle School.  Under his direction the Ft. Zumwalt North Jazz Band has three times presented concerts at The Midwest Clinic, twice at the Jazz Education Network Conference, and four times at the Missouri Music Educators Conference.

He has served as Jazz Vice President for the Missouri Music Educators Association and remains active as a saxophone teacher, clinician and adjudicator and currently resides in the St. Louis area with his wife Tina, and their three children, Alex, Katie, and Chloe.