Whether you agree with the message or not, whether you condone the life-style or not, this historic event and its music is said to have “defined a generation.” This second installment on our 4-day look-back at Woodstock ’69 focuses on the legendary MUSIC that was performed there. The Story – The Collage Video – The Artists.

Day 2, in contrast to the day before, presented a balance of heavier music.  Woodstock ’69’s Saturday included many memorable and legendary performances.

Day 2 Artists – Who was there? 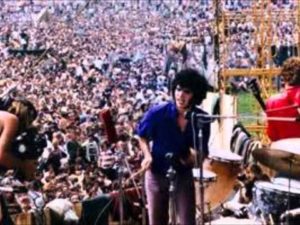 Quill – Starting at 12:15 pm, Quill was the first band on the second day, Saturday, the 16th.   Quill was mainly known for playing numerous small clubs in the New England and New York area. 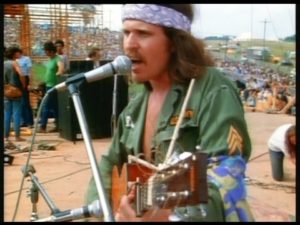 Country Joe McDonald – He performed twice that weekend.  The first appearance was a solo performance without his band, The Fish.  Country Joe played a simple but relaxed solo set for about half an hour. 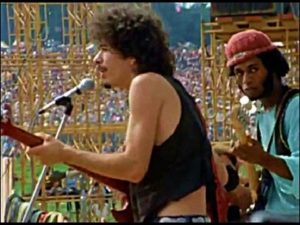 Santana – Santana brought their unique style of music to Woodstock, a fusion of electric rock and Latin percussion. They started at 2:00 pm on Saturday, relatively unknown to the audience. Although their debut album Santana was released in the same month, most of Woodstock’s audience was hearing them for the first time, having played mainly local gigs in the San Francisco area. Santana’s performance was a huge hit, a powerful and magical set featuring that incredible percussion section.  That section included drummer Michael Shrieve, who performed his legendary drum solo on “Soul Sacrifice”.  Band leader Carlos Santana soon became known as one of the giants of rock music with his distinctive and dazzling guitar work at Woodstock ’69. 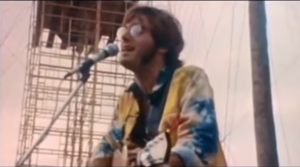 John Sebastian – Sebastian, a former member of the group The Loving Spoonful, later became popular among the rock festival circuits.  He had a memorable, albeit unscheduled appearance at Woodstock, appearing after Country Joe McDonald’s set.  He played songs such as “I Had A Dream,” “Rainbows All Over Your Blues,” “Darling Be Home Soon” and “Younger Generation,” which he dedicated to a newborn baby at the festival.

Keef Hartley Band – The Keef Hartley Band was the first British band that performed at Woodstock. Woodstock was their first U.S. gig and played their to support their album Halfbreed (1969). It is rumored that they played with Santana’s equipment. 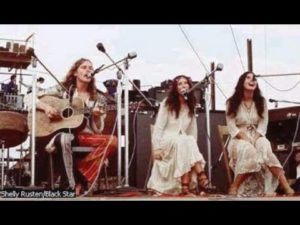 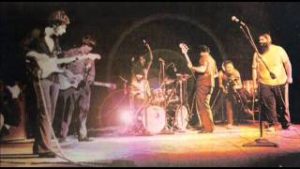 Canned Heat – Canned Heat became rock favorites after their Woodstock gig. In 1969 they had already added psychedelic elements to their blues influenced songs and their Boogie Rock kept the people dancing. They hit the stage on Saturday, the 16th at about 7.30 pm, close to sunset which occurred at 7.56 pm, with a wisely chosen set list that featured their greatest hits: “Going Up the Country” and “On the Road Again”, the last one as the encore. The set included “Fried Hockey Boogie,” an almost 30 minute jam that included a drum solo. 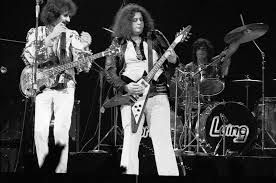 Mountain – Mountain, who played heavy blues rock mainly influenced by the well-known band Cream, featured vocalist/guitarist Leslie West and bassist/vocalist Felix Pappalardi. The group was formed on Long Island and Woodstock was only their fourth gig.  The band went on around 9 pm. 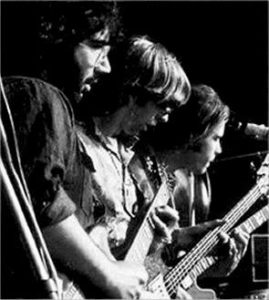 The Grateful Dead – The Grateful Dead are their own phenomenon. Influenced by blues, jazz, country, folk rock, they stretched their compositions to incredible lengths with improvised solos and lyrics. The Grateful Dead came late on stage because their sound man and electrical engineer insisted on fixing the electrical ground on stage. Also notable was that their heavy equipment squashed the festival’s “turntable” stage.  Further, the rain dampened the stage and the band luckily escaped the possible danger of electrical shock.  Songs were delayed because of the long breaks between them and, starting at about 10:30 pm, they finished around midnight. 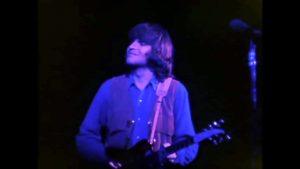 Creedence Clearwater Revival –  Even though their performance didn’t make it into the Woodstock Movie for whatever reason, it was one of the true highlights of the whole festival.  Though they were delayed from a Saturday night start to Sunday morning (around 12.30), their blend of r&b, folk and country-rock didn’t fail to impress.  However, band leader John Fogerty complained that the extra long Grateful Dead set delayed their performance causing many to miss CCR, having already gone to sleep for the night.  It seems he has a point!  So be sure to catch what many missed by viewing our DAY 2 COLLAGE VIDEO!