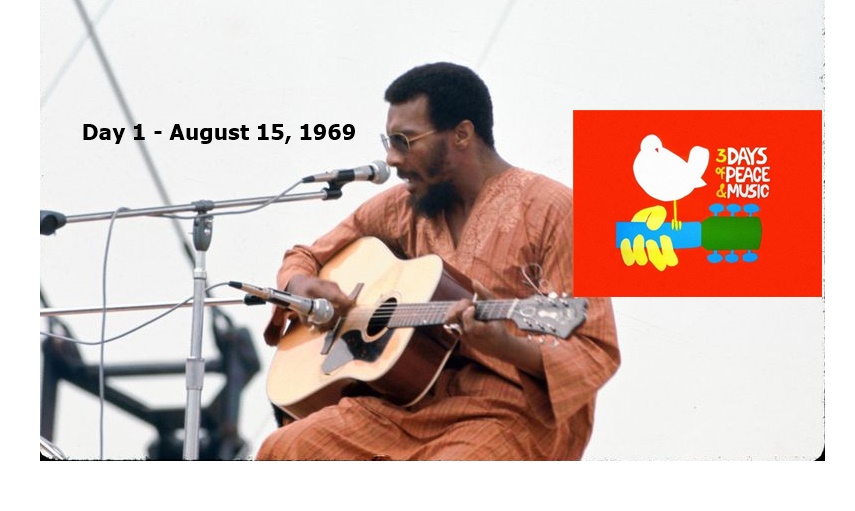 Whether you agree with the message or not, whether you condone the life-style or not, this historic event and its music is said to have “defined a generation.” This first installment on our 3-day look-back at Woodstock ’69 focuses on the legendary MUSIC that was performed there. The Story – The Collage Video – The Artists –

In August 15-18, 1969, the original Woodstock Festival brought together close to a half million people in a “celebration of peace, music and love.”  An originally planned “3-day music and art fair” for 50,000 exploded into actually a 4-day event for 400,000 plus.  Fifty years later, there are  anniversary celebrations of Woodstock large and small taking place throughout the country and around the world.  Coming at the time that the United States was embroiled in an unpopular war, still grieving from the death of Dr. Martin Luther King and Robert Kennedy, young people were reaching out to new styles of music.  The Woodstock Movie brought those young people unforgettable music from legendary artists like Jimi Hendrix, Crosby Stills Nash and Young, The Who, Santana, and so many more.  As you view this post, you may be surprised to learn some of the artists who appeared that neither made it into the movie or get mentioned when discussing Woodstock ’69.

Day 1, in contrast to the heavier music later to come, featured more of a folk music theme.

Day 1 Artists – Who was there? 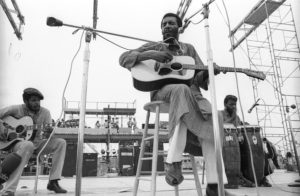 Richie Havens – Havens as a live performer earned widespread notice. His Woodstock appearance in 1969 catapulted him into stardom and was a major turning point in his career. As the festival’s first performer, he saved the day with an unplanned extended performance of nearly three hours. In part, Havens was told to continue playing, because many artists scheduled to perform after him were delayed in reaching the festival location with highways at a virtual standstill. He was called back for several encores. Having run out of tunes, he improvised a song based on the old spiritual Motherless Child that became Freedom. The subsequent Woodstock movie release helped Havens reach a worldwide audience. 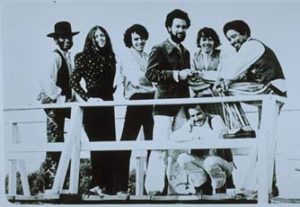 Sweetwater – The second band that played at the Woodstock Festival, arrived later on Friday afternoon because they were stuck in the traffic jam. They started at about 6.15 pm.  Notable songs included “Motherless Child” and “Oh Happy Day.” 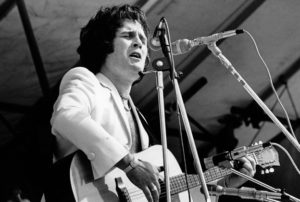 Tim Hardin – Tim Hardin sang his “If I Were A Carpenter” song solo, as well as a full set of his music while backed by a band that included drummer Muruga Booker. 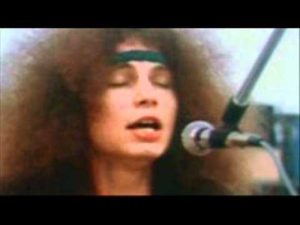 Bert Sommer – He played for about 30 to 40 minutes accompanied by a bass and a second guitarist. He was a lesser-known but talented folk artist and fit perfectly in the Friday band schedule. 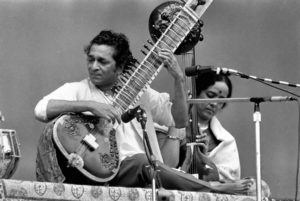 Ravi Shankar – He was considered Indian music genius who made his first appearance to the western world at the Monterey International Pop Festival in 1967, invited by Beatle George Harrison. In the wake the search for new influences, his music became very popular.  Shankar started at about 10 pm on Friday evening and played for over 40 minutes throughout the rain. 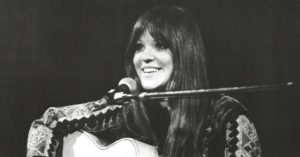 Melanie Safka – Her solo set was short but sweet, performing at 11 pm. Melanie played instead of The Incredible String Band who refused to play while it was raining. She was asked to be part of the festival because the producers of the Woodstock Festival maintained offices in the same building that she did. During her set the audience lit up candles to accompany the music. Later she wrote a song about that which was a great hit: “Lay Down (Candles in the Rain)”. 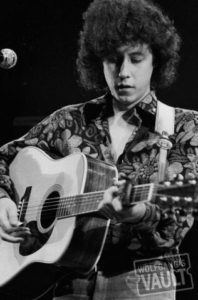 Arlo Guthrie – Like his late father, the legendary folk singer/composter Woody Guthrie, Arlo is known for singing songs of protest against social injustice. Guthrie’s best-known work is “Alice’s Restaurant Massacree”, a satirical talking blues song about 18 minutes in length.  His song making it to the Woodstock Movie was “Coming Into Los Angeles.” 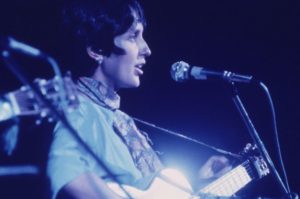 Joan Baez – The female counterpart to Bob Dylan, folksinger and anti-war protester Joan Baez, was the last act on Friday evening. She started at about 1:00 am and appropriately, she wished everybody a good morning. Her perfectly arranged set featuring her beautiful and skillful voice was a fine finish for a chaotic and exhausting first day. During her performance it was drizzling, and then after her she finished it started to rain heavily.