If We Want to Maximize Learning, is It Better to Focus on Our Failures or Our Successes? - Nottelmann Music Company

If We Want to Maximize Learning, is It Better to Focus on Our Failures or Our Successes?

Curated from the Bulletproof Musician – by Noa Kageyama, Ph.D.

Is it better to focus on our failures or our successes?   Whether it’s an audition, a math final, or your herculean efforts to prepare a non-dried-out Thanksgiving turkey for once, it’s never fun to fail, make mistakes, or fall short of your goals. Which probably explains why there are so many quotes on the internet about the value of learning from our failures, and embracing setbacks. Like…

“The greatest glory in living lies not in never falling, but in rising every time we fall.” -Ralph Waldo Emerson

And even a few cautionary quotes to make sure we don’t let success get to our heads. Like…

“Success is a lousy teacher. It seduces smart people into thinking they can’t lose.” -Bill Gates

And sure, I suppose mistakes are inevitable. And that the way we interpret and respond to mistakes is an essential aspect of effective practice and learning (as in this basketball study). Because mistakes do indeed provide great “teachable moments,” where we can swoop in, clarify what went wrong, and figure out how to get a different result the next time. For instance, when my kids bring home a subpar grade from school, it feels like a perfect opportunity to pause for a moment to talk about what happened and why, clarify what we’re aiming for, and brainstorm what adjustments might get them closer the next time.

But focusing relentlessly on our biggest slip-ups and the things we are doing least well can be kind of a bummer. And though I know dogs and people are not the same, our dog DJ seems to learn way better from his successes than his failures.

So…assuming there might be something to this for humans as well, which is it? Do we learn better from our failures? Or from our successes?

Like most things in life, I think the answer is “both” and “it depends.” And it even appears that cultural differences may even play a role. But when it comes to learning how to play our instruments better, serving a volleyball, or becoming the campus cornhole champ, there is mounting evidence which suggests that focusing exclusively on our big misses and epic fails may not be as helpful as originally thought.

A team of researchers (Saemi et al., 2011) took 28 kids from an elementary school, and had them practice throwing beanbags at a target on the ground. And to make things a little trickier, made them do so with their non-dominant arm. The target was about 10 feet away, and 8 inches across. Around the target were a series of concentric circles – like a bullseye – to help measure the accuracy of their throws. If the beanbag landed on the target, they got 100 points, but if it landed in any of the other zones, they’d get fewer points. Kind of like playing darts. But with beanbags. And the dartboard drawn on the ground. Umm…so maybe not really like darts at all.

Anyhow, each student got 60 total practice throws, divided up into 10 blocks of 6 throws each. And because it’s pretty obvious how successful your throw is if you can see where it lands, they were blindfolded to keep them in the dark about how well they were doing on each throw. But after each batch of 6 throws, they received feedback about their performance, consisting of the throw #, their score (0-100), and info about where the beanbag landed relative to the target (Short? Long? Off to the right? To the left?).

How much learning stuck?

24 hours later, the students came back for a test to see how much of what they learned the previous day had stuck.

Nothing complicated. Just 10 blind throws. Only this time with no feedback. 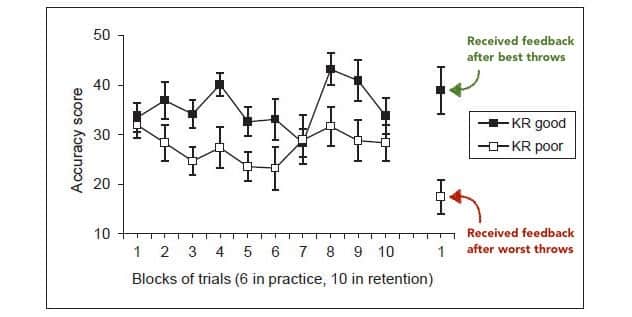 So what is it about receiving feedback about successes that seems to lead to enhanced learning?

Well, we all like feeling competent (which is associated with better learning1). And feeling like we’re good at something tends to increase our motivation (which also seems to be related to enhanced learning2). So hmm…maybe my son is actually onto something when he tells me that harping on his mistakes doesn’t make him feel like learning…?

Anyhow, going back to the study, the researchers had the students take a quick intrinsic motivation assessment after their practice session to see if motivation and perceived competence might indeed be part of the equation.

Lo and behold, the students receiving feedback about their best throws had significantly higher perceived competence scores, suggesting that they felt much more capable than their counterparts.

And wouldn’t you know it, their intrinsic motivation scores were higher too.

The implication being, that the feedback we give students doesn’t just have an informational element, but a motivational component as well – both of which have an impact on how effectively they learn.

While I don’t think the study’s results suggest that we should completely ignore big mistakes, it does seem clear that focusing exclusively on our students’ (or our own) biggest mistakes is not the best way to maximize learning. Nor confidence, or motivation for that matter.

Instead, focusing on their most successful attempts, and the things they are doing right, could lead to greater improvements that actually stick.

In case you were wondering if this was something that only works with kids, you may be glad to learn that similar studies have been done with young adults (early 20’s), and older adults (late 60’s), and found the same boost in learning. So this is a general finding that musicians of all ages can probably benefit from.

And in one last interesting twist, this study found that the enhanced learning effect is even greater when the student knows in advance that they will be getting feedback after their best attempts.

So next time you are teaching a lesson, try switch your focus for a moment and keep an eye out for the attempts that come closest to the goal, rather than the biggest goofs.

And when you go into the practice room to do a little practicing yourself, listen for the times when you get things right. What exactly did you do? How can you do it again? What could you tweak to make it even better next time?

Performance psychologist and Juilliard alumnus & faculty member Noa Kageyama teaches musicians how to beat performance anxiety and play their best under pressure through live classes, coachings, and an online home-study course. Based in NYC, he is married to a terrific pianist, has two hilarious kids, and is a wee bit obsessed with technology and all things Apple.
GO TO ORIGINAL POST