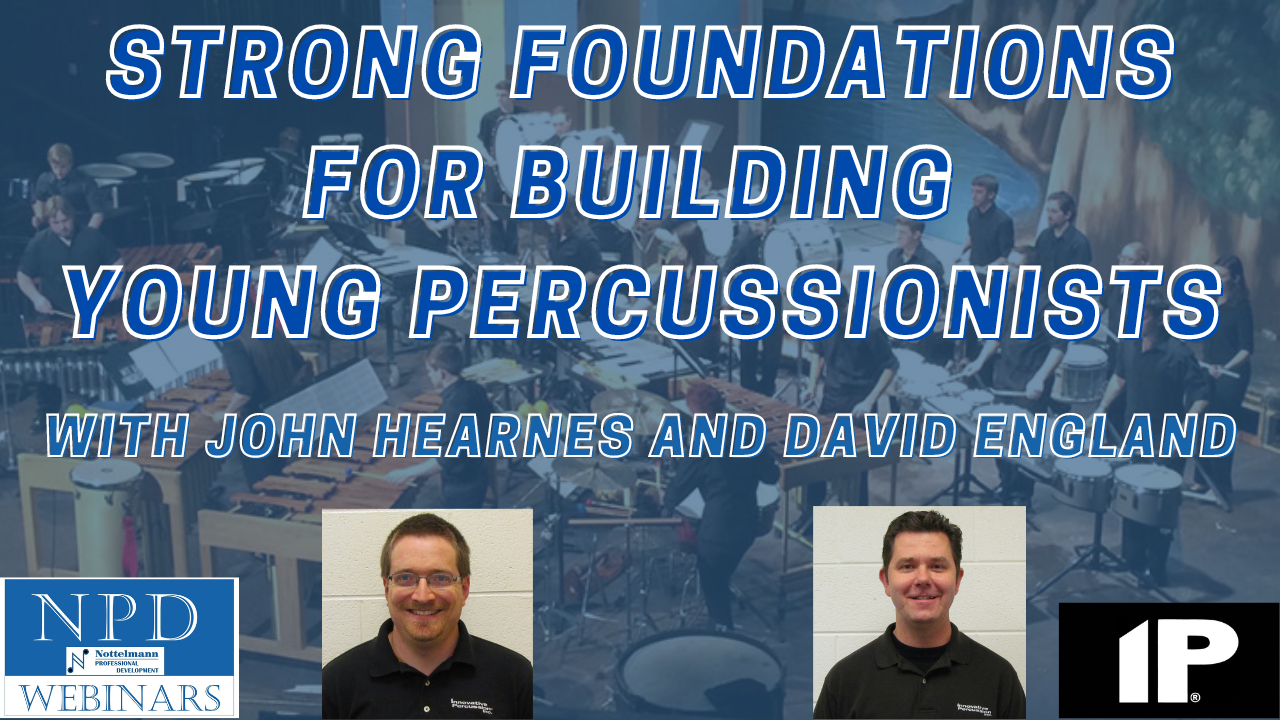 f you teach young percussionists, even if you have a long track record of success, this five-part webinar in two videos is for you. Presented by John Hearnes and David England, this is a convenient, online version of their recent presentation at the Midwest Clinic – International Band and Orchestra Conference.

John Hearnes – Originally from Cape Girardeau, MO, John R. Hearnes is an Associate Band Director at Oakland Middle School in Rutherford County, TN. He has taught middle school since 2001. Mr. Hearnes received his BME from Middle Tennessee State University in 2001 studying under Lalo Davila. He also has a Master’s in Education and an Education Specialist degree in Leadership.  Considered a total percussionist, Mr. Hearnes finds himself at home on all aspects of percussion, including snare drum, timpani, mallets, drum set, Latin percussion, marching percussion, and world percussion. An avid composer and arranger, Mr. Hearnes currently has over 100 individual publications with Row-Loff Productions, including both marching and concert literature. He is the author of The Mallet Player’s Toolbox, a beginning method book by RLP. He is an Innovative Percussion and Mapex/Majestic artist. Mr. Hearnes has presented sessions at the 2014 NAfME National In-Service Conference, the 2013 and 2015 ASBDA Region V conferences, and at district meetings and state conventions in TN, MO, and KY.  Most recently, he was selected to present at the prestigious 2019 Midwest Clinic International Band and Orchestra Conference.  Mr. Hearnes lives in Murfreesboro, TN, with his wife and two sons.

David England – Mr. England currently teaches the Blackman Middle School Band in Murfreesboro, TN where he was selected as Teacher of the Year in 2008 and 2017. He has been teaching middle school band since 1994. He graduated from Middle Tennessee State University in 1994 where he studied with Lalo Davila. Since 1993, Mr. England has been the percussion arranger and an instructor at Father Ryan High School in Nashville, TN. Father Ryan has won three WGI World Championships and has been a perennial WGI Finalist, medalist and a fan favorite. Father Ryan is also a three-time winner of the PASIC indoor marching percussion standstill competition as well as several local and state awards. Mr. England is a composer for Row-Loff Productions and an artist with Innovative Percussion and Mapex/Majestic. He is an active clinician having presented at the Mid-West Band and Orchestra Clinic, NAfME National Conference, ASBDA Regional conference, TnMEA Conference, TN PAS, and many others. Mr. England is also a very active adjudicator for marching bands and indoor percussion/winds traveling to various states and circuits. He marched with the Cadets Drum and Bugle Corps from Hackensack, New Jersey. He also served as an instructor for the Dutch Boy Drum and Bugle Corps and was the percussion supervisor and percussion arranger for the Music City Drum and Bugle Corps from Nashville, TN for 2017 and 2018. Mr. England and his wife Jennifer have four children, Breanna, Aaron, Angel and Damien, and two grandchildren, Aliza Dimple and John David