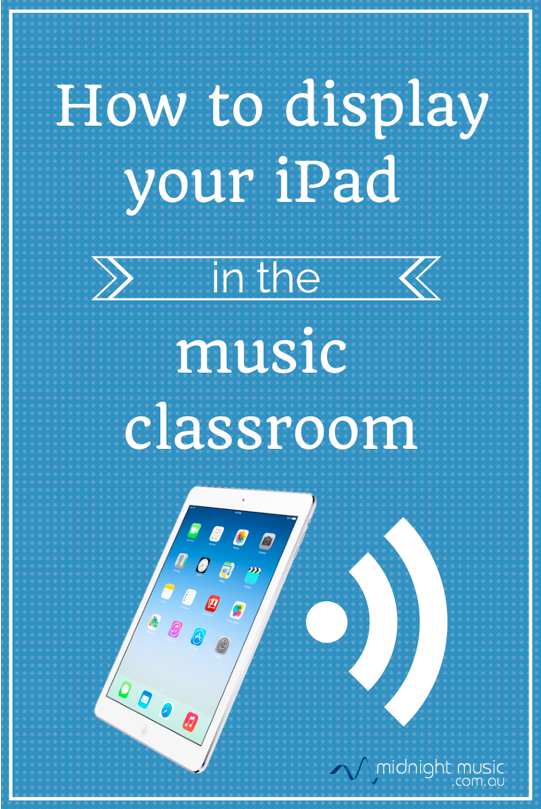 How To Display Your iPad in the Music Classroom

There are already a number of articles and tutorials written which go into the details of the options for displaying your iPad on a data projector or IWB to students during class time.

I won’t go into all of the options here – other educators like Learning in Hands’ Tony Vincent have already covered them in a clear and concise way. Tony has a handy downloadable guide comparing the different choices (preview below – click on the image to visit Tony’s original article). I do, however, want to talk about the options from the point of view of the music teacher. What works really well in the maths or literacy class may not be the best choice for the music classroom.

Because music teachers are special (but you already knew that, didn’t you?).

There are two main options:

You may be surprised to find out that most of the time I use option two.

Plugging in: the drawbacks and one huge benefit

The drawbacks are obvious: I’m tethered to the cable and can’t move from the front of the room or pass the iPad around any students (or adults – most of my workshops are with teachers).

[you can see this in action in the image on the right]However, there is one crucial musical benefit to this method:

There is no delay between what I do on the screen and what I hear (and what students see when they are looking at the data projector). I can press a record button and accurately record a melody or rhythmic part in time to the metronome click.

That brings me to the main drawback of the wireless options:

There is a noticeable delay between what you do on the screen and what is seen and heard via the data projector. This delay is known as latency.

You may have experienced latency in a desktop sequencing or notation program already – you click the record button and try to play your part, but when you press a key on your MIDI keyboard, there is a delay before the sound is heard, and before the note appears on the screen. It’s frustrating like you wouldn’t believe and makes you feel and sound like a terrible musician! Rhythms are notated later than expected (sometimes a full quaver late) and no matter how hard you try to play ahead of the click, it simply doesn’t help.

Avoiding latency is a deal-breaker for me.

During the majority of my iPad workshops I’m showing creative music apps which involve playing in time to the beat, so latency is not an option.

It doesn’t mean you need to be tethered to the data projector all the time. The wireless option is ok when you’re doing non-performance activities like showing videos or sheet music.

The bottom line is – have both options available.

Buy the appropriate adaptor for your iPad and make sure the VGA cable is accessible and long enough (a couple of times I’ve had to cut cable ties in order to access a reasonable length of the VGA cable at a school!).

When to use the plug-in option

Use the plug-in option…

Basically, any activity that involves performance and playing in time.

When to use the wireless option

Basically, when you are doing an activity that does not involve performance and playing in time.

A word about sound

When plugging in to the VGA cable, you will also need to plug a speaker of some sort in to your headphone port on the iPad. Many music classrooms have speakers installed in the room so that you can plug your laptop or desktop computer in.

Use those ones if you can – unplug them from your desktop or laptop and plug straight into the iPad. Again, lead length can sometimes be an issue (and/or there are those pesky cable ties that lock everything down!). Replace a short lead yourself with a nice long one, or speak to your IT person.

The wireless options include sound – kind of. If you use Airserver or Reflector, you are essentially projecting your iPad on to your computer screen, so in order to amplify the sound, your computer will need to be plugged in to some decent speakers.

One of the most frequently-asked questions in workshops is – can I use iPad apps on my interactive whiteboard (IWB)?

At this time, there is no way to interact with iPad apps by touching the IWB screen. That is, you can display your iPad screen on your IWB but you cannot walk up to the board, touch the screen and operate the app.

When you plug your iPad into the IWB you are essentially just using the IWB as a large, expensive data projector. In order to interact with the app (i.e. make it work) you or your students still need to touch the iPad screen.

I hope that helps clear up some of the confusion that often surrounds this subject!

Check out Nottelmann Music’s exclusive interview podcast with Katie Wardrobe as she makes the implementation music education technology easy to understand and accessible.