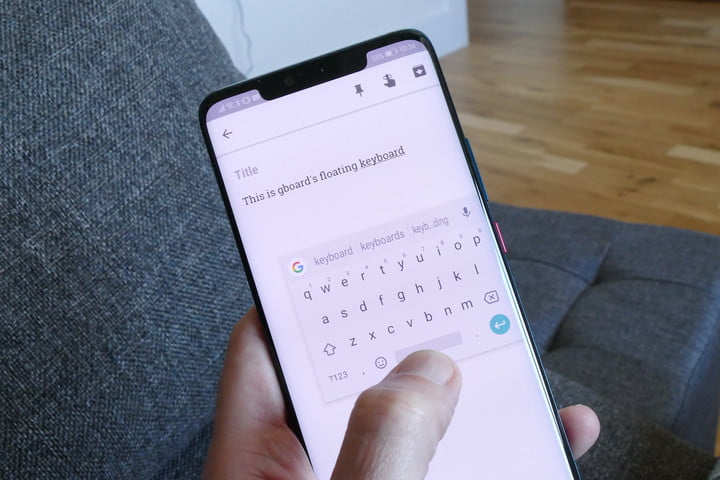 Google’s new floating keyboard is so helpful, it’ll put you on cloud nine

Google has added an interesting new feature to its Gboard Android keyboard app. It’s called floating keyboard, and it may just be the answer to your problems if your swanky new bezel-less smartphone almost slips out your hand as you furiously type on the keyboard. It’s also great for anyone who feels the keyboard is never quite where it needs to be, due to a big screen, small fingers, or a time-sapping combination of both.

Provided your app has been updated to version 7.6 or later, you should be able to find this handy feature right now. Exactly as the name suggests, it undocks the keyboard from the bottom edge of the screen and lets you move it around freely, putting it exactly where your fingers want to be.

Why would you want to use this over a one-handed keyboard, where the keys are edged over to one side of the screen? It’s particularly suited to the new generation of smartphones with very small chin bezels. These areas gave us something to grab onto and steady the phone in our hand when typing, but now they’re much smaller, it’s easier to fumble the phone when typing — a potentially expensive mistake. Place the floating keyboard higher up the screen, and the chances of this happening are reduced.

Want to give it a try? If you don’t already have Gboard installed on your Android phone, go and get it now, because it’s superior to most other keyboard apps out there. To find the floating keyboard mode, you have to go digging into some menus. Tap the Google “G” icon on the keyboard, then the three dots for further options, found on the far left of the top menu that appears. An icon for the floating keyboard should be one of the large buttons where the keyboard used to be. Tap it, and the keyboard will float on the screen.

If the keyboard on your phone screen always feels a little awkward to type on, or you’re worried about dropping your phone, give this feature a try — it may be exactly what you’ve been looking for.