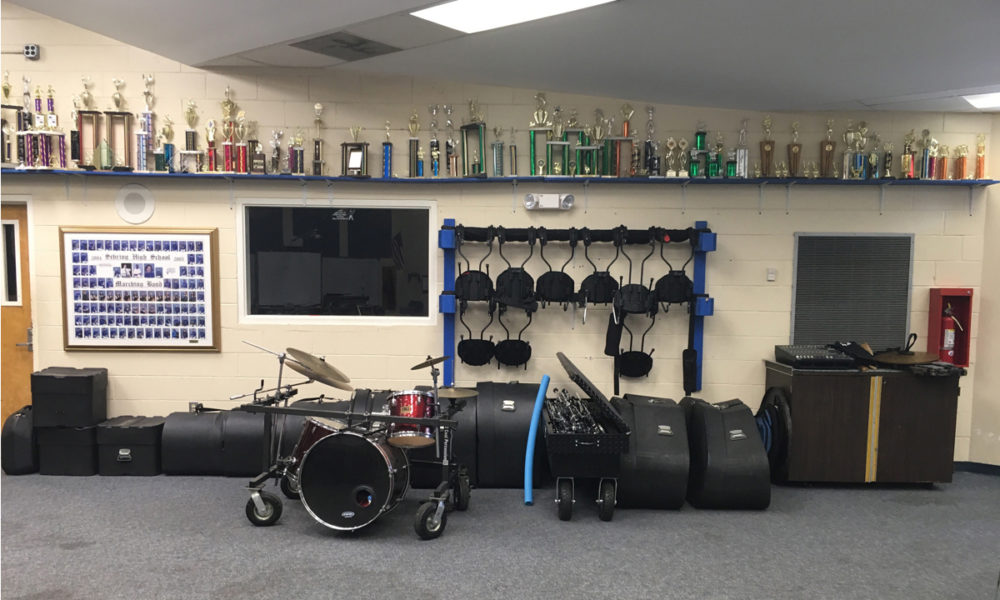 Band Room Makeover Makes the Most of Space

Innovative products and technology as well as practical space-saving ideas can help band directors turn even the smallest space into an efficient rehearsal room.

In 2012, Fayetteville (Arkansas) High School became a completely new school, and director of bands Barry Harper received the band room of his dreams.

After a four-year renovation project, the formerly 10ththrough 12th grade school expanded to make room for the incoming 9th grade class. In the process, Harper advocated to enlarge his small rehearsal space.

Before the renovations, Harper could not fit his entire ensemble in one room. He took various pictures like the color guard rehearsing in the hallway to show that band room expansion would need to be a priority during the school’s reconstruction.

Now the band room is 4,800 square feet with 20-foot ceilings, enough space for the marching band to practice fundamentals inside when the weather is bad and for the winter guard to practice when the gym is unavailable.

Whether their rooms are large or small, band directors share the common need to make efficient use of the space available to them.

Colorado Paniagua, former band director at Sebring (Florida) High School, had to make use of a much smaller band room. To maximize her space, Paniagua found educational tools that could be held in the palm of the hand.

She recommends that band directors and students download mobile music education apps such as tuners and metronomes. “Anything on a smart phone can be a double-edged sword because the kids also have access to their texting,” she warns, “but it’s been more of a help than a curse.”

Paniagua also used an interactive whiteboard in front of the room. During a rehearsal, she would project a video of the marching band’s performance to point out aspects of the show that needed to be fixed. She could freeze-frame a part of the video, “draw” on the digital board and say, “‘See you! You are not part of that straight line!’” she says.

Paniagua used the smartboards in conjunction with the Pyware 3D Viewer app to help marching students learn their drill. She connected a QR code to the app, projected it on the smartboards, and asked students to scan the code on their phones to receive their drill charts electronically.

According to Paniagua, using an app helped eliminate the problem of lost or forgotten drill charts—not to mention wet and ruined documents due to the Florida rain. “There’s no such thing as a high schooler without a cell phone,” Paniagua says.

Brian Cox, director of bands at Central Bucks High School South in Warrington, Pennsylvania, also uses projected images to help his marching band. Though his room does not have a smartboard, he makes frequent use of his high-definition projection screen and document camera at the front of the band room.

Cox finds the projector useful even in music-only rehearsals. “If I’m trying to show the ensemble something in the score, I’ll throw it under the camera, so they can see it on the projection screen,” he says. “When I show them the score and how the parts work with each other, I can hear the difference. They’re being more respectful to the other people playing in the ensemble.”

To practice marching technique indoors, Cox uses a 10-yard Marching Step Guide, a floor mat with yard-line markers and divisions for different step sizes. “When we have bad weather or want to give more individualized instruction, we lay out our step guide,” Cox says. “We put two kids at a time [on it] and do basics. We have staff give individualized feedback.”

Harper has also found the Marching Step Guide to be a useful tool in his band room, using multiple step guides at once to simulate a scaled-down field environment.

Harper has also given a step guide to each of Fayetteville’s feeder junior high schools, so that the 8th graders can start working on marching techniques before going to high school. 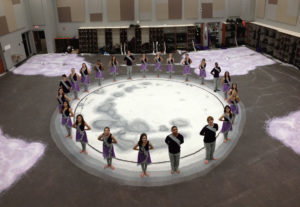 Since Fayetteville’s concert bands don’t practice or perform in the fall, the band room stays devoted to marching band, meaning chairs and music stands are often stowed away. “When we’re inside, we do arcs standing up,” Harper says. “During the fall, [we keep the room] clear.”

In later parts of the year, Fayetteville supports four concerts bands, so the band room is always fluctuating. “We set it up day to day,” Harper says.

Central Bucks South does the opposite. Cox keeps the band room organized for multiple ensembles at the same time. “I have a concert band and jazz ensemble setup at all times,” he says.

For concert band, Cox spreads 55 chairs throughout the first two-thirds of the room, creating four rows. Then, he leaves a 10- to 15-foot gap before the jazz setup, which continues to the back of the room. The jazz setup includes two sets of risers for trombones and trumpets, a row of chairs for saxophonists, and a baby grand piano.

At Sebring, the band has faced challenges when trying to determine the best possible setup because the room is very small and unusually shaped. “The room originally was a small shadowbox theater, so it’s this weird octagon shape,” Paniagua says.

To efficiently store equipment in a small room, Paniagua has had to think outside the shadowbox; her solution was to use as much of the room’s vertical space as possible. “We have a locker room in the back quadrant,” she says. “We’ve really had to learn to use above-locker space.”

Because of the room’s original intention, Paniagua also faced another challenge—acoustics. As a theater, the room was designed to carry and project the sound. “In a band room, you want the opposite; you want to deaden that sound,” she says.

Now all of the walls and the ceiling are covered with paneling to prevent sound from bouncing off.

For Cox, one of the most important tasks is getting his room organized in the off-season. “My biggest thing is trying to get organized in the summer,” he says. “Right now, there is nothing on the floor of my band room.”

Cox suggests cleaning out the entire band room at least once per marking period to maintain organization. “Kids will put things anywhere they want to at the end of rehearsal,” he says. “Once per marking period, we completely clear the room and set it up the next week.”

To keep Fayetteville’s room organized, Harper has always seen storage as a crucial piece of the puzzle. “You can never have enough storage,” he emphasizes. “If there’s anything we can tell someone [who wants to] build a new facility—figure out all the storage you need and multiply it by two!”

For schools undergoing renovation, Harper suggests that directors try to obtain a larger band room than they currently need. “You want to allow for growth,” he says. “You don’t want to outgrow the band room in three or four years. Build for more than what you have.”