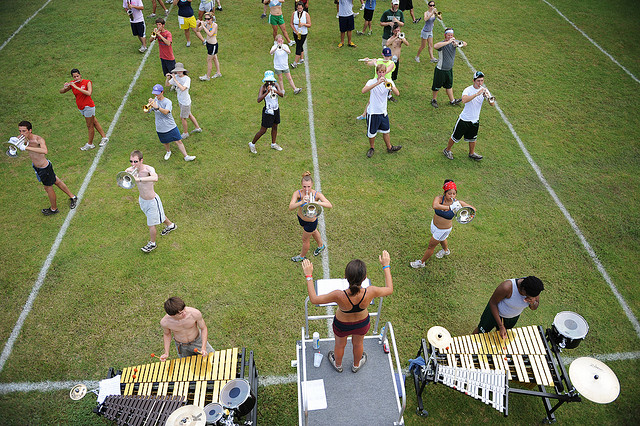 Curated from AMP, the Association of Music Parents – by Kathleen Heuer –

My name is Penny Ray, and I’m a music parent. My husband and I have three teenagers: a sophomore who plays mellophone in her public high school marching band and French horn in the Wind Ensemble at school; an 8th grader who plays trumpet in the local homeschool concert band program; and an 8th grader on the autism spectrum who has not yet been introduced to a musical instrument.

My music experience is limited to the piano lessons that I begged for as a child (that proved piano was not my instrument) and to handbells at church beginning in my high school years. For most of my childhood, I attended a small, rural K-12 school with no band program.

That’s why I’m so glad my kids have the opportunity to march. In this post I’ll highlight 18 lessons that marching band teaches kids.

Music. Music affects the brain. Hearing it. Playing it. Especially playing it. The math involved in playing music keeps the brain active and growing. Music can uplift you when you’re down or dragging.

Discipline. Long rehearsals. Memorize drill. Memorize music. Early is on time; on time is late. The discipline you experience and practice is a foundation for discipline later, through college, in the workplace, as a parent. The discipline of being a part of a team like a marching band is experience that you’ll take with you through life.

Teamwork. Every part of a team is important. Every part contributes. There is amazing satisfaction in coming together with a team, working hard alongside and with a team, to perform a show. And the teamwork is very different from that of a sports team, where the goal is to defeat opponents in games. In sports, teams try to go after an opponent’s weakness and to shut down an opponent’s strong scorer. The teamwork in marching band is about individual and group self-improvement, competing with self, comparing results with self over time.

Camaraderie. Shared experiences over time build relationships and friendships. A job transfer moved our family across the country as my sophomore was ending her 8th grade year. We moved in time for her to attend every practice with the marching band. She began her freshman year in a new school in her new state with a posse of friends from the marching band. Marching band was a wonderful bridge between two states

Time management. From July through November, a good chunk of time will be consumed by rehearsals, football games, and contests. You give up a lot of computer time, video game time, free time during those months. Time management experience will serve you well throughout life.

Sacrifice. Band members get an opportunity to see the benefits of sacrificing what you want to do (computer chats, shopping, goofing off) for the good of the team. There is personal satisfaction in knowing as you are walking off the field together that the group had a good show. Seeing your scores improve throughout the season or from year to year is rewarding. Awards, medals, trophies from festivals and competitions are sweet tangible payoffs to the sacrifices band members make throughout the season.

Resilience. Students mess up. They keep going. Judges make mistakes or make calls we don’t agree with. The band members keep going. Students learn that a bobble or a fall during a competition is not the end of the world. Resilience is a hot topic in psychology today, and being able to bounce back after a mistake or setback is an important skill throughout life, a skill that develops by being practiced and experienced, and (fortunately or unfortunately), there are lots of opportunities to practice in marching band. We parents watched in dismay as our band experienced a tempo tear during prelims of a competition and yet the band recovered and finished strong. I was as proud of them for their collective resiliency as I was by the fact that we made finals that day.

Flexibility combined with creative problem solving. Our band staff embraces feedback from judges’ commentaries. Instead of rigidly insisting that the show they put together at camp in July is perfect, they take constructive criticism seriously and make adjustments where needed. Our staff model flexibility and creative problem solving for the students; the students practice flexibility in tweaking the show until the show is the way the directors want it.

Manners and respect. Band members practice the habits of manners and respect. Students represent both school and community when at a performance or competition. Our band is expected to be respectful in all situations, from rehearsals to football games to competitions. While the parents are going nuts in the stands, the band members on the field remain perfectly still in situations where we all know they wanted to dance and scream.

Education and history. The fine arts camp my daughter attended during two summer vacations names cabins after composers. Imagine our delight to make the connection that she stayed in the cabin named for Bizet and last year played a melody from Carmen with the marching band.

Proprioception. That body awareness thang. Marching backwards, marching sideways while facing straight ahead without checking your neighbors’ locations requires you have a good sense of where you are in space and helps students experience and grow in this area.

Trust. When you’re marching backwards, or sideways, you must trust that your bandmates are doing what they’re supposed to do so that you don’t crash into them on a trek across the football field during your precision marching.

Lots of practice hours. In his book Outliers, Malcolm Gladwell tells us that 10,000 hours of practice at anything = success. During marching season, marching band students get many more hours of playing music than most non-marching students.

Music programs give our students practice and experience in skills that reach far beyond musical notes and instruments. The kids don’t realize that they are getting experience in so many non-musical life-skills that will have positive impacts as they become adults. Our band director often quotes the Harris Poll that found that 73% of CEOs from Fortune 1000 companies were involved in music programs in high school. When I think about the different areas of development that marching band reaches, I can see why. I am glad that my children have the opportunity that I did not have and watching them and their friends grow into adulthood will be a joy to watch from a front row seat as we parents and teachers see the ways in which marching impacts their lives over the years.

IF YOU FOUND VALUE IN THIS BLOG POST, CONSIDER JOINING AMP TODAY!

Married for 26 years, Penny Ray has three teenagers including a set of twins where one twin is on the autism spectrum and one twin developed typically. She is an accidental homeschooler of two children at the moment, with the other in public school. A United States Southerner by birth, she spent more than 20 years away from her beloved South before returning to it recently. Her interests include the things that her kids do: marching band, theater, baseball, baseball, baseball, figure skating, special needs cheerleading. She writes about autism and special needs at Homeschooling, Autism, & “Stuff” and at Homeschool Mosaics.