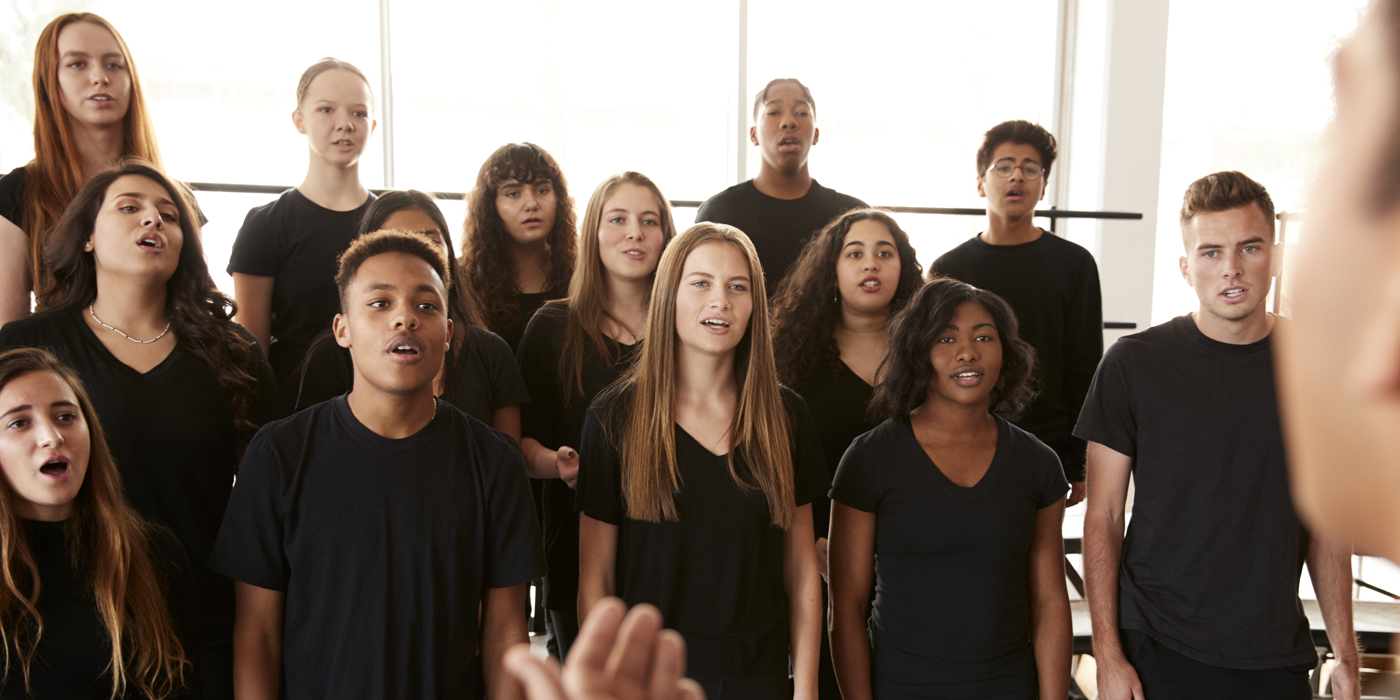 As a former high school choir director, I recognize both the challenges and rewards of teaching aural skills within the context of large group rehearsals. While time is often tight, and concert schedules tend to dictate priorities, there are countless benefits to incorporating skill-building activities whenever you can. Here are ten easy ear-training exercises that will improve the musicianship of choral singers.

Many teachers use this activity for classroom management. It’s as simple as clapping a rhythm for the class and inviting them to clap the pattern back. Choose age-appropriate rhythms or (even better) motives selected from your current repertoire.

There are plenty of creative extensions: throw in some body percussion such finger snaps, foot stomps, thigh pats, tongue clicks, etc.; try the activity in canon, which requires students to perform one pattern while simultaneously listening to the next; echo percussive consonant patterns to reinforce diction skills; advance to brief melodies (sung on solfège) to work on pitch; invite standout students to lead.

I learned this one in my boy choir days. Play a three- or four-note melody on the piano and ask singers to sing it back on a neutral syllable such as “la” or “loo.” At first, patterns should be simple (step-wise, outlining a triad, in conservative ranges, and tuneful). Eventually, move on to longer sequences, more difficult intervals, and less predictable melodies. For advanced groups, try two patterns at once – one for treble singers, the other for changed voices.

If your singers are proficient with Curwen hand signs, you can lead them through melodies without notation, entirely a cappella. My students always enjoyed it when I snuck in a popular tune, giving the instructions “keep singing along, but raise a hand as soon as you figure out what the song is.” Try something fun like sol-fa-mi-re-re—do-mi (Katy Perry’s Firework) or la-sol-la-sol-la-sol-mi (the hook from Lin-Manuel Miranda’s Alexander Hamilton).

The ability to audiate – or hear music during complete silence – requires practice. A great way to develop this skill begins by singing a familiar song several times in a row. Each time you repeat the song, replace one additional word with a rest. Try Head, Shoulders, Knees, and Toes leaving out one more body part each time. Similarly, choose a passage from your repertoire, and instruct students to perform specified words, notes, or measures “internally.” Perhaps you do the first bar aloud, become silent in bars two and three, and then sing measure four aloud. This will instantly reveal where pitch insecurities lie.

We all know the joy of canons – when entrances are staggered at specific intervals, the overlapping tune creates pleasant harmony. Want to make it more interesting? Assemble entrances closer than traditionally stacked to create some challenging dissonances. Encourage accountability by assigning individual singers their very own entrance/part.

Here’s a way to train singers to listen harmonically. Play a major or minor triad at the piano. When students hear a major chord, they sing “do-mi-sol-mi-do” in response. For minor chords, singers respond with “la-do-mi-do-la.” As with all of these exercises, maintain a steady pulse and tempo throughout. For this drill, the chord is played on beat one (of a four-four measure), and responses are eighth notes beginning on beat two. Randomly switch between major and minor triads to keep students guessing and ears working.

Display a melody or rhythm for the class. Perform the pattern, making one or more errors. Following the performance, ask students to identify the exact error(s), giving a constructive critique. Invite standout students to lead the activity.

Sing an ascending scale in unison (on solfège). As you descend, direct sections of the choir to sustain specific pitches, creating a chord by the end. At first, keep the sopranos on high do, the tenors on sol, the altos on mi, and the basses on low do.

To extend the exercise, direct individual sections to change pitches, while the choir continues to sustain the chord (stagger breathing as needed). When the sopranos move down to ti, you will have a major 7th chord, then the move basses up to mi, and you’ll have a minor chord. Experiment, creating many different sonorities.

Years ago, I observed a wonderful honor choir conductor get impressive results with this one. The exercise identifies the “center of pitch” by exploring the intervallic distance between half steps. Stand and sing a pitch, let’s say G. Continue to sing while slowly turning in place (180 degrees) over eight counts. Gradually raise the pitch as you move, ending up on a G# by the end of the turn. Try not to “land” the new pitch at one specific moment, but rather let it unfold gradually. Reverse the turn and descend.

Play the vocal parts of an excerpt from your current repertoire, leaving one part out (perhaps the alto notes). Ask students to identify which part is missing. As an extension, play the excerpt again, inviting the entire choir to “fill in the blanks” by humming the missing notes (alto, in this case).

One Final Thought on Ear-Training Exercises

Singers will stay engaged as long as they find the activities to be enjoyable, so frame these exercises as “games” whenever possible. Keep in mind that with success comes motivation. Begin each drill simply so that success comes right away. You can easily raise the bar once you’ve got them hooked!

Andy Beck is the director of choral publications at Alfred Music. A prolific composer and arranger, he has over 450 popular choral works, vocal resources, and children’s musicals currently in print, including the highly regarded method books Sing at First Sight, Vocalize!, and the Vocalize! Canon Collection. Mr. Beck is in demand as a guest conductor, choreographer, adjudicator, and clinician for music educators and students throughout the United States and beyond. In recent years, he has been a commissioned composer and/or guest conductor for honor choirs of all ages.